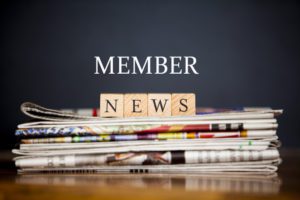 Our members are a busy bunch! Read below to see what we’ve been up to!

Dawn Baird, of Vancouver, Washington, and a missionary in the Democratic Republic of the Congo for 25 years, has published a children’s book (a true story) Joshua Moves to the Jungle.

Xochi Dixon, of Fond du Lac, Wisconsin, has 15 devotionals in the beautiful new Guideposts devotional, All God’s Creatures (May 2019–April 2020).

Jon Drury, of Vancouver, Washington, Mary Hake, of Crooked River Ranch, and Sue Miholer, of Keizer, have six devotionals each in the spring issue of God’s Word for Today.

Leslie Gould, of Portland, just signed a contract for her fourth series with Bethany House. The series is Plain Patterns and the first book is Hearth and Home.

Charles Harrel, of Portland, has yet another story, “The Familiar Fisherman,” in a Chicken Soup for the Soul anthology. The title of this new volume is Messages from Heaven and Other Miracles: 101 Stories of Angels, Answered Prayers, and Love That Doesn’t Die. Charles’ story is about his father, Raymond, and himself and their shared love of fishing and camping. It’s a bittersweet story that includes a miracle and much encouragement as well as some family history. Charles has a book-signing on April 6 at the Rainbow West bookstore in Vancouver Mall.

Jan Rae Johnson, of Astoria, has published a memoir, I Will Enter His Gates, with Outskirts Press.

Crystal Linn, a new member from Sequim, Washington, published a Christmas anthology, All Things Christmas, in the fall of 2018. In December she began writing a column for her local newspaper.

Marty Magee, of Mill City, had two of her articles, “Just Spread the Mayonnaise” and “From Every Stormy Wind that Blows,” published in Purpose in 2018. And she has an article scheduled to be included in the January 2020 edition of LIVE.

Sherry McCorkle, of Florence published her book Hidden Unforgiveness: expose it, forgive one another, empower your life.

Barbara McCourtney, of Brush Prairie, Washington, has been doing book signings for her book Does This Diet Make My Butt Look Fat?: Confessions of a former fat lady.

Audrey Sauble, of Portland, published her third children’s book back in January. It’s a science-themed informational coloring book called Bug, Bug, Spider! It was recently an Amazon #1 New Release in Children’s Zoology Books for a couple of days.

Richard Spillman, of Sandy, won a silver medal as Illumination’s General Christian Fiction Book of the Year for The Awakened. It also received Cassie’s Book Cover of the Year on her blog.

Two of our members, Mary Hake, of Crooked River Ranch, and Lydia E. Harris, of Lake Forest Park, Washington, have pieces in the compilation Moments with Billy Graham: America’s Preacher Whose Ministry Led to Our Changed Lives. The book is one of two finalists in the compilation category for a Selah Award.

The following members had an article in the February issue of The Christian Journal: JoAnne Bowles, of Bend; Susan Brehmer, of Portland; Jon Drury, of Vancouver, Washington; LGayle Gustafson, of Portland; Annika Klanderud, of Dundee; Maxine Marsolini, of Happy Valley; Mylissa Salvador, of Bend; and Jan Sheerin, of Bend.