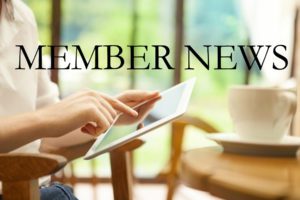 Quick Note: Many of these accomplishments are a direct result of contacts made at an OCW summer conference.

Susan Bates, of Beaverton, had her devotional, “A Mother’s Legacy,” published in The Upper Room on May 13.

Barbara Blakey, of Olympia, Washington, has her novella, Emma Underground, included in The Underground Railroad Brides Collection by Barbour Publishing that released June 1.

Shirley Dechaine, of Tualatin, self-published I Have Called You Friends, a devotional for adults with limited reading skills. She recently sold 500 copies. Sue Miholer, of Keizer, was her editor and Shirley was a 2016 Cascade winner in the devotional category.

Heidi Gaul, of Albany, wrote another testimonial for The Great Commission Project through Good Catch Publishing. Every Day with Jesus, a hardcover devotional book from Guideposts that released in March, includes 15 devotionals from Heidi.

Mary Hake, of Terrebonne, has a quiz called “The Path of Wisdom” in the June issue of Clubhouse and devotions in the summer issue of Take 5+.

Yvonne Kays, of Bend, had a story accepted for publication in Bible Advocate’s online magazine Now What? and also has a poem in the July 15 issue of LIVE. She recently received word that one of her devotionals was being published in The Secret Place—three years after she submitted it. And she received her first payment for photographs that will appear in 2019 in LIVE along with two stories.

Maxine Marsolini, of Happy Valley, has changed the name of her blogtalk program from “The River” to “Live It Out.” Guests are interviewed at 10 a.m. on Monday, and the goal is to help listeners grow, overcome, and ignite—to live as God desires.

Jennifer Anne F. Messing, of Portland, had a short fiction story, “Tall, Dark, and Handsome,” and a movie review, “Moms’ Night Out” published in the May 2018 online issue of Mustard Seed Publications. She also signed and sold many copies of her books Everlasting Love (a short fiction collection) and Morning’s Promise (a poetry gift book) at a Mother’s Day author event held on May 10 at Parkrose High School in Portland. Information about her books can be found at www.JenniferAnneMessing.com.

Darlene Panzera, of Belfair, Washington, had her novella The Song of Hearts Set Free included in The Underground Railroad Brides Collection by Barbour Publishing that released June 1. She has also contracted a second novella with Barbour, The Groom She Thought She Left Behind, for The Runaway Brides Collection due to be released January 1, 2019.

Katie Powner, of Manhattan, Montana, is a finalist in the Contemporary category of the Genesis Contest sponsored by ACFW (American Christian Fiction Writers).

Pam Rosales, of Beaverton, and Sue Miholer, of Keizer, each have six devotionals in the summer issue of God’s Word for Today.

Kathleen Ruckman, of Eugene, had 12 devotionals published in Every Day with Jesus from Guideposts Books. They also just contracted her to write 15 more devotionals for their upcoming book All God’s Creatures. Two of her poems will be published in LIVE this year.

Bob Williams, of Lebanon, has published The Perils & Parables of Pastor Preechet. Subtitle is “Western Ways Collide with Southern Culture.”