Karen Barnett, of Albany, is a finalist for the Carol Award from American Christian Fiction Writers 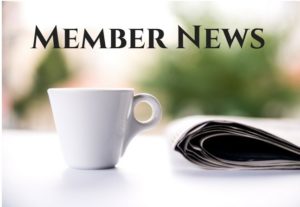 (ACFW). Her title, Where the Fire Falls, is one of three finalists in the historical romance category.

Janice Cantore, of Waikaloa, Hawaii, is a finalist for the Carol Award in the romantic suspense category with her book Lethal Target.

Camille Eide, of Sandy, has a new book coming out in December. Wings Like a Dove is a 1933 romantic relational drama from WhiteFire Publishing. Sounds interesting: “An unwed pregnant Jewess in search of her father finds temporary work teaching truant orphans for a disillusioned ex-minister in a small Indiana town. It is the story of finding the courage and grace to battle every kind of prejudice, even those lurking in our own hearts.”

Charles Earl Harrel, of Portland, has a story, “The Repair Shop,” in Chicken Soup for the Soul: It’s Beginning to Look a Lot Like Christmas (101 Tales of Holiday Love and Wonder), which will go on sale at retailers on October 14.

Susan Maas, of Gresham, wrote the June 30 devotional in The Upper Room. It was both in print and on their website.

Marty Magee, of Mill City, had her article, “The Coconut,” in the May edition of The Gem.

Barbara McCourtney, of Brush Prairie, Washington, will have another of her stories, “My Church Found Me,” in Lutheran Life magazine. It will also be on their website.

Kendy Pearson, of Dundee, is one of three finalists in the Historical Fiction (up to Vietnam Era) category in the Genesis Contest, sponsored by American Christian Fiction Writers (ACFW).