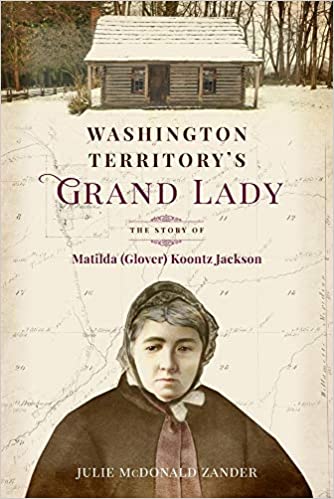 Matilda (Glover) Koontz was thirty-seven years old, a pregnant wife, and the mother of four young sons when she joined her husband in May 1847 for their trek across the Oregon Trail, lured by the promise of fertile farmland in the Willamette Valley. But then the unthinkable happened: her husband, Nicholas, drowned while crossing the Snake River. After a series of tragedies, she fulfilled her husband’s dream and arrived with their sons at Oregon City–but then what? In early 1848, the widow with four sons married John R. Jackson, a British-born naturalized American, and traveled north to his log cabin known as Highland Farm. Although plagued by sorrow and loss, this resilient pioneer woman helped shape Washington Territory and gained a reputation for hospitality, kindness, and good cooking throughout the territory–and even in the nation’s capital of Washington City. “This book is a ‘must read.’ It tells the incredible and exciting story of one woman’s journey on foot across the plains to the promised land of Oregon Territory. In many ways, Matilda Koontz Jackson could be described as the ‘first lady’ of Washington State. She watched it all unroll in front of her eyes and she played a significant part in making our life what it is today. The book is well written and documented with many details that the other historians have missed. Frankly, I loved the book and recommend it to all. Readers will not be disappointed!” Ralph Munro, retired Washington Secretary of State, 1980-2000