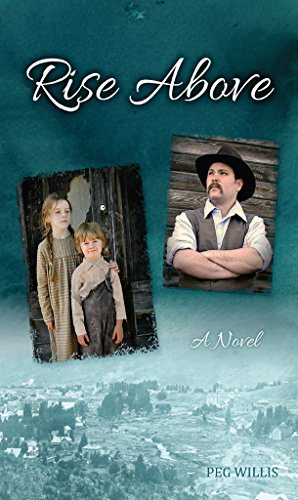 On the evening of Sunday, June 14, 1903 a massive flash flood devastates tiny Heppner, Oregon. Two young children, Lilyann and Gilbert Harmon, vanish. With nearly a quarter of the town’s residents dead—and some of the bodies buried deep in the mud of the Willow Creek Valley—most people assume that the children died and their bodies were just not found. But their father, Mac Harmon, refuses to give up hope and combs the Pacific Northwest for seven long years in search of them.
Heppner, meanwhile, struggles to remake itself. The struggle is very real, even in the midst of laughter and new life. Widows and widowers—some with children—abound, and the number of houses in town has been reduced by a fourth. Naturally, this results in many new “ready-made” families. New babies are born, and children begin to play again, even as they strive to make sense of something the wisest adults cannot understand. Although fear has become a permanent resident in this little town snuggled (or trapped) at the junction of several streams in steep canyons, hope and courage begin to rise above that fear. Healing from physical, mental, and emotional wounds continues, person by person, heart by heart, leaving in its wake a hope that is tangible and powerful, and endurance slowly develops into triumph.
But that triumph does not come easily. Young Shan Collins takes on the huge task of raising his three youngest siblings. Grace, barely alive after escaping an unthinkable evil, wonders why she did not die in the flood. Esmerelda longs for a better life but isn’t at all sure such a thing is possible—at least not for the likes of her. Will can’t walk. Michael is doing his best to become a juvenile delinquent. Lives all over town have been turned upside down. Can anything ever be the same again? No. It just can’t. It never will be the same.
The missing children are, indeed, still alive. But where are they? And can they be rescued from the “life” they now live? If love is enough to find them, Mac is equal to that task. But is love enough? The love of man—maybe not. But the love of God—His love can conquer all.