I Didn’t Want to Leave Without Saying Goodbye

Home > Books > I Didn't Want to Leave Without Saying Goodbye 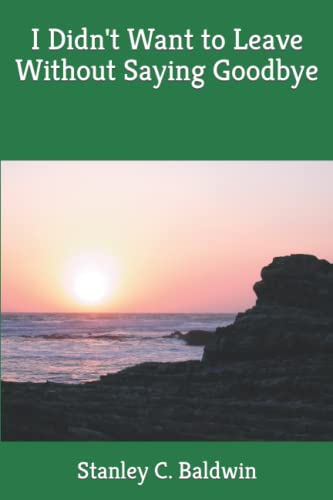 Using his acclaimed gift for telling real life stories, Author Stanley C. Baldwin and family colleagues write fascinating accounts of their life-altering journeys of discovery. Who could have guessed, for example, that his furtive attempt to bury garbage in frozen Canadian tundra would years later put him on national TV in the USA? Or that his first published story, “Fitted for a Casket,” would open doors for him across the USA and world-wide from Africa to Australia?

Part I, “No Ordinary Life,” unveils the struggles involved and the price paid when author and wife, Marge, both aged 20, embark on an adventure-filled life. Leaving their home in beautiful Oregon, they exchange their “really cool convertible with a rumble seat” for a tiny basement apartment in Three Hills, Alberta. The difficult birth of their first child, Kathy, occurs there in minus 30 degree weather. Complications follow and Marge is hospitalized for twelve days. Next they travel to the University of N. Dakota to study linguistics for a life work among primitive people with no written language. There, the near-death experience of their second-born daughter Krystal forces a drastic change of direction for the young family.

In Part II: “Growing Up Baldwin,” daughters Kathy and Krystal and two younger brothers Steve and Greg recreate memorable events for readers’ enjoyment and inspiration. “My Impossible Dream” is Kathy’s entertaining account of acquiring her first horse against all odds. Krystal, having survived early trauma, emerges into an idyllic childhood that warms the heart of every reader. Third-born Steve surmounts the challenges of growing up in a “dirt poor” preacher’s family. He works his own way through college, taking six years to earn a degree. He then proceeds to gain a masters degree in philosophy and a doctorate in jurisprudence on his way to becoming a highly successful trial lawyer. Fourth-born son Greg learns to ride a bike at age 3, graduates to an XR-75 Honda at age 10 and goes on to win many trophies in motocross, competing under the lights at Portland International Raceway.

Part III is entitled “Live Here—Head There.” The “Here” of the title refers to our earthly journey as humans while the “There” contemplates the life to come. Both are addressed here in four major Stanley Baldwin writings published in the leading evangelical periodicals of our time but never before presented in a book. The “Here” calls for responsible living that enhances both our humanity and our freedom, not one at the expense of the other. “There” focuses on “The Glories of Heaven” and transcends the usual streets of gold and gates of pearl metaphors. Most readers will likely respond, “Makes sense, why have I not known about this before?”

In almost every life there is real-world pain. Part IV, “Bruised but Not Broken,” looks unblinking at this sad truth and suggests reasons for it. Stories include Baldwin’s 25-year-old great grandson, Ryan Berhar, who so far has battled SMA 22 years longer than doctors expected him to live. Part IV also introduces Kami, a fitness trainer disabled by a stroke in her thirties; Bridgette, who loses her mother to early onset Alzheimers; Ameerah, homeless at 15, then at 17 struck down and critically injured in a crosswalk. Despite all this “bruising,” Baldwin delivers on his stated intent: to nurture in the reader “a merry heart that does good like a medicine.”

Part V, “The Saga Continues,” shows how right choices in life pay off for years and generations. In this wrap-up of the book, Baldwin recreates important crisis points in his life not previously divulged. He also provides a gift to other Bible teachers: details on three of his original object lessons widely acclaimed but never before published. Finally, writing at age 92, he admonishes himself and others to reject ageism and the inclination to spend final years just waiting to die. The practical alternatives abound.