And Then the Rabbit Bit Me

Home > Books > And Then the Rabbit Bit Me 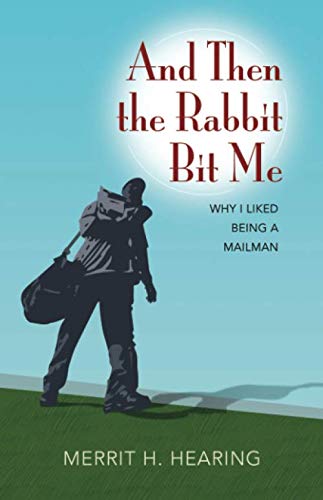 Why I Liked Being A Mailman

What is it like to make “appointed rounds” for 30 years? To spend 27 years in the same neighborhood, delivering electric bills, pizza coupons, and eagerly awaited parcels? Come join Merrit Hearing in this delightful romp and catch a glimpse of the privilege of having 100’s of friendships formulated day-by-day over decades of faithful service. Join him as he captures nuggets of wisdom gleaned from the little ones on his route – his “Route Kids” – as they again and again astound him with their affection and honesty. Merrit takes you from the beginning when he didn’t even have a uniform, through battles with dogs, weather, and one out-of-control hare. Then he faces his greatest challenge: wrangling with his emotions as he walks away from the folks who had become such an intrinsic part of his daily life. This is the story of one mailman, possibly like the one you have in your neighborhood. There is more to it than you might think. From the author of Lessons from a Son’s Life … and Death, Oregon Christian Writers 2017 Cascade Award winner. An honest account of dealing with the loss of a child. Full of hope for those who have suffered a devastating death in the family and also for those who reach out to them.