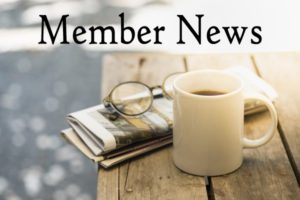 Xochitl Dixon, of Fon Du Lac, Wisconsin, is a regular contributor to Our Daily Bread, the quarterly daily devotional booklet. Between six and nine of her devotionals have appeared in each issue since April 2017.

Judy Gann, of Lakewood, Washington, has her article, “Never Alone,” in the September/October 2018 issue of Bible Advocate. (This article was acquired at the 2017 Summer Conference.)

Gordon Grose, of West Linn, has an article, “‘Though He Slay Me, Yet Will I Trust Him’: Misreading Job,” in the September 2018 issue of Christianity Today. His article will also be online as a featured article.

Maxine Marsolini, of Happy Valley, has an article in the September/October issue of Christian Communicator. Title is “The Art of Word Painting.”

Sally Stuart, of Tigard, has a column in each issue of Christian Communicator.

The August issue of The Christian Journal included articles by Jon Drury, of Vancouver, Washington; Gayle Gustafson, of Portland; Annika Klanderud, of Dundee; Maxine Marsolini, of Happy Valley; and Jan Sheerin of Bend.