Jennifer Anne F. Messing, of Portland, had three new poems accepted for publication in LIVE, one poem accepted for The Plus Years, and a short fiction story that was published in the October 9, 2016, issue of The Gem. She taught a workshop, “Publish Consistently in Magazines Amid a Busy Life,” at the Southwest Washington Writers Conference in September at Centralia College. A new e-book version of her poetic devotional, Morning’s Promise, is now available. Visit her website for ordering information: www.JenniferAnneMessing.com.

Patricia Oliver, of Lincoln City, published a book she and her late husband, John, wrote. The title is The Evicted and the book is a narrative biography of the life of the Sturmers, who were friends of John. The Sturmers were “two remarkable individuals” who lived in Russia during the early years of the turmoil of the wars and revolutions in the early 1900s.

Kendy Pearson, of Dundee, is a finalist in the ACFW (American Christian Fiction Writers) First Impressions Contest. Her historical fiction manuscript is one of three finalists in that category. First Impressions gives unpublished writers the opportunity to have the first five pages of their Christian fiction manuscript evaluated by an industry professional. Winners in each category will be announced in mid-December. In the same week she was notified of this, Kendy signed with Wendy Lawton of Books & Such Literary Agency, whom she met at the 2015 summer conference. Wendy is following up with an editor who expressed interest in Kendy’s manuscript at the 2016 summer conference. “Wow. Thank you OCW Summer Conference! So many dreams start at the Red Lion in August, folks!”

The November edition of The Christian Journal included articles from Sandra Bensman, of Dundee, Maxine Marsolini, of Happy Valley, and Jan Sheerin, of Bend.

Each of the following members has a devotional in the winter issue of The Secret Place: Mason Brown, of Forest Grove, Lynn Hare, of Portland, and Charles Harrel, of Portland.

The following members have devotionals in the winter issue of Pathways to God: Kathy Sheldon Davis, of Junction City (2), Lynn Hare, of Portland (4), and Sue Miholer, of Keizer (4).

The December edition of The Christian Journal has articles by the following members: Eleanor Cowles, of Independence, Jon Drury, of Vancouver, Washington, and Maxine Marsolini, of Happy Valley. This edition also includes a review of It Take More Than Legs to Stand, by Lyla Swafford, of Beaverton. The review is written by Julie Surface Johnson, of Prineville. 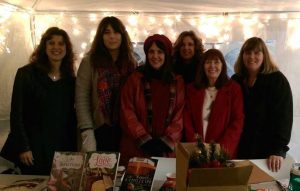